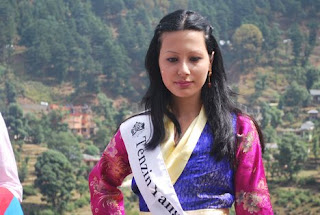 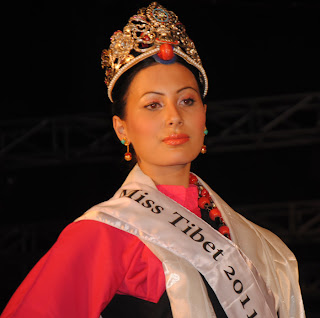 Film maker Norah Shapiro is working on a documentary about the Miss Tibet beauty pageant. You can check out her efforts so far at Miss Tibet: Beauty in Exile. Seeing her efforts took me back to the time I ran smack up against the Miss Tibet Beauty Pageant while living in Dharamsala in 2008. I was shocked that such a thing existed and in what I saw as a self-promoting opportunist using women in typical patriarchal fashion, for his own benefit.

Lobsang Wangyal is the creator and promoter of Miss Tibet. He claims that his intentions are purely based on wanting Tibetan women to become more powerful, less shy and to use the platform of Miss Tibet to draw more attention to the issue of Tibet.  This video called Miss Tibet in Exile, was for me a clear example of Wangyal’s opportunistic leanings and gets especially icky at the end when the girls hand over all the money they’ve won to him. Ugh! Unfortunately there are supporters of this train wreck of a beauty pageant including members of the Tibetan Government who seems to think that any event that draws international attention to Tibet is good for the cause, regardless of the quality or overarching statement made by such an event.

Here’s a novel idea for Mr. Wangyal, if you want to empower Tibetan women there are far better ways to accomplish that task. A beauty pageant that conforms to the age old formula is antiquated and unimaginative not to mention disprespectful toward women. If you are sincere why not get creative and bust out of the mold of traditional beauty pageant fare, be bold enough to refashion a pageant in such a way as to be truly empowering for women? Is there a point in having young girls parade around in swimming suits and fancy dresses, other than to focus on the female body? The inherent nature of a beauty pageant is disempowering simply because it is based on the roulette wheel of genetics. What of the girl who by misfortune does not conform to the agreed upon standards of beauty, is she not beautiful? Start by redefining beauty, and the worth of a woman in society.

Beauty pageants are born out of and are a continuation of patriarchal hegemony. In short they represent dominance and power over women. It should be no secret that we live in a patriarchal world, everywhere not just in the U.S. Across the world patriarchy is the undercurrent that girds government, military, sports, systems of power, financial and educational institutions, it is something that is so pervasive that most of the time we fail to recognize how we are caught up in and influenced by its power.

Beauty pageants are an outward expression of male dominance over women and ultimately the objectification of the female body. They are the expression of women’s perceived worth in the world which is based first on physical beauty set forth by culturally constructed and agreed upon standards of that beauty. Secondary to physicality is talent and intellect which consistently takes a back seat to a woman’s perceived beauty.

A Huffington Post article critiquing pageants points out that, “Beauty contest participants reap great financial benefits when they win, and American viewers are fully accustomed to evaluating and watching women for pleasure” (Jill Filipovic HuffPost 2007). Woman have been objectified for so long that we aren’t even aware of our collective participation. Bombarded on a daily basis with images of women as objects rendered perfect by computer enhancements, we have lost for the most part, sensitivity to this continual objectification.

Tibetans in exile have the opportunity to create a society that is not simply a replication of all that as gone before. They could draw far more attention to their cause were they to attempt a cutting edge rendition of a pageant that was based in respect for women in all of the roles they hold in society. Instead, Mr. Wangyal’s pageant makes these young girls appear foolish and naïve as they have no apparent concept of feminism and how hard women the world over have fought to be taken seriously and valued as important contributors to society, industry and government.